With almost 100,000 inhabitants, the city of Delft is located at the heart of the province of South Holland, between Rotterdam and The Hague definitely mapping out the international atmosphere of the city.

However, Delft is still an undiscovered typical Dutch city. The glorious past of the city comes alive in its great number of monuments, the facades of buildings, churches and monasteries and almshouses.

Delft is known for its historical ties with the Dutch royal family, Delft Blue pottery, the painter Vermeer and scientist Van Leeuwenhoek. The friendly and vibrant student city with its centuries-old canals, charming courtyards and rich history make Delft a unique and distinctive conference venue.

Are you going to Delft for the first time? We would like to give you some tips about all the must-see attractions.

Delft is the city of the world-famous Delft Blue ceramics, the birthplace of the ‘Master of Light’ Johannes Vermeer, and has close ties with the Royal House of Orange. Many of the tourist attractions therefore have a link with one or more of these three icons.

ARE YOU A LOVER OF HISTORY AND CULTURE?

Then there are some attractions you definitely won’t want to miss. The slender tower of the New Church, almost 110 m tall, has been a recognisable landmark in Delft for centuries. And if you climb the 367 steps to the top of the second highest church tower in the Netherlands, you have an amazing view out over the city and the surrounding area.

Not far from the New Church is the Old Church, also known by the local residents as ‘Scheve Jan’ (Crooked John) on account of the strange kink in the tower. Both churches have international allure because of all the famous people from Dutch history who have been interred within their walls. Next to the Old Church is the Museum Prinsenhof Delft, an elegant historical building which was once the home of William of Orange. Here you can discover the history of Delft (and the rest of the Netherlands) and the origins of Delft Blue ceramics. A visit to Delft would naturally not be complete without a visit to one of the local earthenware factories, where you can see and experience the world-famous Delft Blue ceramics and pottery being made in the traditional way  And last but not least: get up close and personal with Johannes Vermeer in the city where this world-famous painter lived and worked his entire life. You can discover everything you want to know about his life and work in the Vermeer Centrum Delft 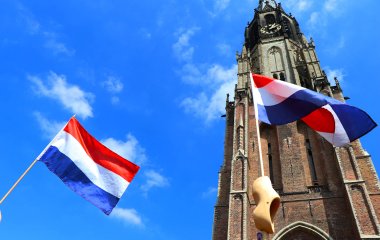 WELCOME TO THE NETHERLANDS

…….with its canals, clogs, tulips, windmills & bikes… The Netherlands occupies an area of 41,160 square kilometers and is home to almost 17 million people. Partly reclaimed from the waters of the North Sea, it is Europe’s most densely populated country. The Netherlands enjoyed a golden age from around 1580 to 1740, when trade and manufacturing flourished, and the United East India Company and the West India Company sent ships to the Far East in search of spices and other exotic goods, while colonising the Cape of Good Hope, Indonesia, Surinam, the Antilles, and New Amsterdam (now New York).
Today, only the Netherlands Antilles is an autonomous part of the Kingdom of the Netherlands. With half of the country lying below sea level, the struggle to keep the North Sea at bay has been a constant feature in the history of this unique country. Disaster struck in 1953, when a high spring tide accompanied by a severe storm broke the dykes in Zeeland. As a consequence 1835 people drowned. To make sure such a tragedy would never occur again, the Delta Project blocked the southwest river deltas using a network of dams, dykes and an impressive 3.2km storm surge barrier.
The Dutch have brought forth many famous painters, including Rembrandt, Van Gogh, Vermeer and Mondriaan. The Rijksmuseum in Amsterdam showcases their works. Amsterdam is one of the world’s most interesting cities. With canals and monuments, gabled houses, countless museums, arts festivals, bikes and an irrepressible joie de vivre, you’ll want to stay and stay. However, don’t ignore places like Delft (home to Delft University of Technology), Leiden and Haarlem with their old canal girdled centres, and The Hague – elegant home of the Dutch government and the Royals. The town of Delft is also famous for its distinctive blue and white pottery. Stroll along the canals, enjoy first-rate beer, hire a bike and explore this ultimate bicycle friendly country.
Capital city Amsterdam
From its earliest days, Amsterdam has been a bustling hub of commerce that welcomed other cultures with open arms. Learn more about this lovely canal-side city, including the rich history and development of its tolerant society. Or jump straight to the modern day and find out about the city’s architecture and its colourful neighbourhoods. If you’re feeling ambitious, you might even pick up a few words of Dutch!
More information about Amsterdam can be found at: http://www.iamsterdam.com/en.